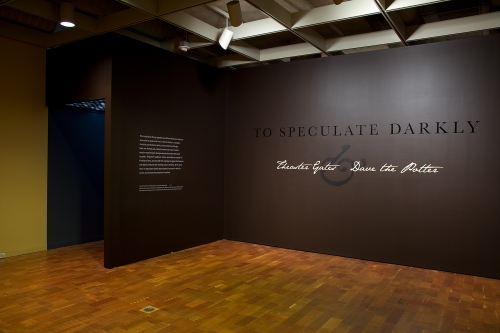 I wanted to embody Dave the Potter. To sing his name as if it were mine, to build a noble jar, and to celebrate deeply the American craft tradition that was my first training. I was familiar with the lore of Dave, but decided to use this invitation to more deeply investigate the complexities of history-making in the absence of narrative, the speculative nature of history, and the ability to conceive of an exhibition based on a singular historical artifact: a pot. To Speculate Darkly became my first tribute to Dave the Potter. Through the exhibition I began to make this larger conceptual conceit known. I convened a gospel choir of over a hundred voices, drawn from Chicago and Milwaukee. Working with Leroy Bach, a Chicago-based musician, I developed a hymnal for the exhibition, dedicated to Dave. In addition, through an Arts/Industry residency at Kohler Arts Center in Sheboygan, Wisconsin, I shared the history of Dave the Potter and discussed the culture of factory labor with Kohler Co. plant workers, leading to new solidarities and intense moments of racial reconciliation. The exhibition was hosted by the Milwaukee Art Museum, an institution that had seen very low attendance from the city’s Black communities. I wanted to acknowledge their presence in and across the city, and began investigating the interruption of museum administration as a way of deeply engaging publics. This exhibition spurred the future work, Soul Manufacturing Corporation, and was the birthplace of one of my pseudo-institutions, The Association for the Advancement of Named Negro American Potters (AANNAP).