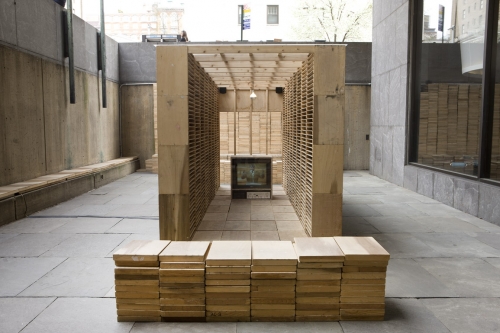 My courtyard installation at the 2010 Whitney Biennial was the third in a series of four installations made of wooden wareboards salvaged from the Wrigley's cvhewing gum factory on the West Side of Chicago. The space offered five elements: a temple, a throne, a shoe shining meditation station, a YouTube video of a Black minister singing, Shine On Me, and a monk (an artist who gave time in service to visitors). Over the course of the exhibition, I arranged for several monks to be present within the piece, performing daily rituals. Derek Chan made paintings, Dara Epison offered alms and conversation, and Torkwase Dyson used the space to reflect on her own artistic practice. All of the attendants offered to shine visitor’s shoes; an apparently complicated gesture. The offers sparked many conversations and new invitations. The piece, an iterative piece was an extension of my interest in temple construction, meditation practices, West Indian culture, and a sense that publics can play a role in the activation of some of my sculptural works.